TunnelBear, or, How I Learned to Stop Worrying and Browse in Peace

I’ve recently started paying for a VPN (Virtual Private Network) service because I wanted to secure my Internet activity and enjoy a degree of privacy online. Even though I am probably technically proficient enough to spin up my own OpenVPN server, I’m too lazy for that, so I’m perfectly happy paying someone to do it for me, specifically: a local (Canadian) company called TunnelBear.

TunnelBear, as their site says, provides “Simple, private, free access to the global Internet you [love]”, which has so far been true for the past few months I’ve been enjoying using it. They have made it easy for average users (and technical but lazy folks like me) to enjoy the benefits of a VPN, like avoiding browsing restrictions and having greater privacy online, but without the hassel of setting one up.

To use TunnelBear, I simply downloaded and installed the Tunnelbear app (which has versions available for Mac, Windows, Android & iOS –they do support Linux but not with a dedicated app) which sits in the panel for easy access. I also appreciate their attention to design; the app happens to be quite simple and best looking VPN app that I could find. Plus who doesn’t enjoy the quirky use of bears and bear metaphors. 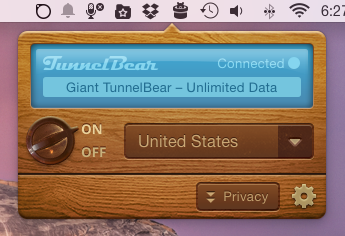 Activating the VPN is as simple as a switching it on and, when the mood strikes, I can switch countries –by having a bear tunnel to a server located in another country and giving me an IP address in that location. As you can see, I’m currently “in” the United States –even though I’m not in the United States. The benefit of this is that I can access content on the web limited by location, such as US-only Netflix content, BBC video in the UK, etc.

I happen to pay ($4.99/month) for a “Giant” TunnelBear, which grants me unlimited data transfer through the VPN, but you have the option use TunnelBear for free in their “Little Bear” tier, which has a 500MB data transfer cap –which as far as I can see it, could be useful for when you want to do some secure browsing on open wifi in a cafe, but it’s obviously no good for streaming.

There are a few things to note, if you’re considering signing up: